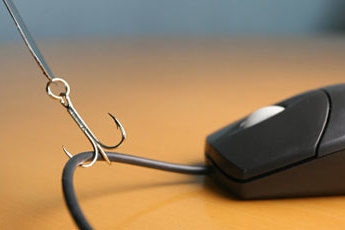 Most of us can recognize a shady email or Facebook post when we see one. I mean, how many of us actually know a Nigerian prince, right?

But hackers are pulling fresh tricks to dupe us into parting with our
money or privacy. In the past four months alone, instances of malware
on mobile phones have doubled, making smartphones a hotbed for
wrongdoers. And according to the Federal Trade Commission, 9 million
Americans lose their identity to hackers every year.

Don’t want to become a stat? Here are the three new online scams and how to avoid them:

Online Scam: Your Dating Match Is Actually a Fraud.

The scenario: You’re
in search of cuties on Internet dating sites when you meet a handsome
U.S. Army serviceman stationed in Iraq. The guy is friendly and open
about the war and his post-battle dreams. Best of all, he has a hot mug.
What starts as a mere flirtation grows into a deep, personal
relationship … in which your new man is comfortable enough to ask you to
lend him some money.

How it works: That guy may not be an actual
serviceman, but a scammer hoping to work his way from you heart to your
wallet. The Army Criminal Investigation Command (CID) has been notified
of this scam hundreds of times in the past six months. The CID says the
scammers assume the identity of real-life soldiers, coupling their names
and ranks with photos of other soldiers found online. Sometimes, the
scammers paint the Army as a downtrodden entity, in which soldiers need
pay for Internet connections, leave papers, medical treatment, special
laptops, international telephones or a flight home from Iraq or
Afghanistan.

How to steer clear: Army CID spokesperson Chris Grey
says that the Army has plenty of support programs for soldiers overseas
and that an actual soldier would not be making such monetary requests.
The CID warns women to be suspicious of the following:

If you think you’re talking with someone who is impersonating a soldier, report the incident to the Internet Crime Complaint Center and the Federal Trade Commission.

The scenario: You search online for your favorite celebs, whether it’s to get the latest dirt or find out just how they maintain their bikini bods. Harmless, right? Until your screen freezes and your computer gets slow.

How it works: This latest online scam plants viruses
on PCs when gossip seekers search for stars online. Heidi Klum is
currently the most dicey celebrity to search on the Web. Searches of
“free downloads,” “videos” or “screensavers” coupled with her name stand
a 1-in-10 chance of installing malware on otherwise clean PCs.

How to steer clear: Install an antivirus and
antispyware program on your computer and devices. Limit widespread
Google searches for sexy celeb pics. Instead, search within a well-known
Hollywood blog, like PerezHilton.com or OMG.Yahoo.com.

Online Scam: Your New Favorite App Isn’t an App at All.

The scenario: You
just discovered a new addictive game on your phone or downloaded a
beautiful wallpaper. Best of all, it’s free! But then you get your phone
bill and … whoosh! There goes $1,000. How did this happen?!

How it works: What you really downloaded was a
dangerous program in disguise that sends unauthorized texts from your
phone and racks up your phone bill. Equally common is a program with
which hackers steal your personal information, compromising your
identity. Last year, an estimated 4.6 million Android users downloaded a
seemingly innocent Star Wars and My Little Pony branded
wallpapers to their phones, which collected and sent user data, like
subscriber identification and phone numbers, to a site in China.

How to steer clear: Always
download your apps from a trusted source, like the iTunes store or the
Android Marketplace. Apple and Google have a tough process for accepting
new apps, and they police their stores for malware problems.

Have you ever fallen for an online scam? Share your story in our message board below.