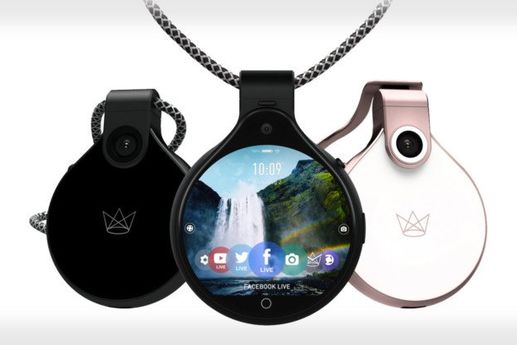 If you needed any confirmation about how out-of-control the human race has become, look no further than the new Front Row necklace offered by a company called Ubiquiti Labs. First came Google Glass, then Snap’s Spectacles, and now this.

A new camera makes it possible to record and stream video without lifting a finger.

This camera is worn like a necklace, and has 2 cameras that can live stream video straight to FaceBook, YouTube, Instagram and Twitter. It can be control by a touch screen, or your smartphone via the app that uses need to install. ‘Share your world in real time,’ reads the device’s website. The website goes on and on about how awesome this device is and how it will free up your hands to do cool stuff like, I don’t know, fill out you unemployment form or stare at your phone. Yeah, because Meercat and FaceBook Live have given us so many great unedited, real-time memories of things like sexual assaults and murders for all to watch. I read the book The Circle and as I recall, it pretty much clearly lays out in how flawed the notion of a ubiquitous, ever-streaming device like this is, and how society is not ready for it. My guess is most civilized people of average intelligence won’t want to buy it either. How does that expression go? ‘Just because you can doesn’t mean you should…’ or something. Anyway, The Circle was made into a movie and currently owns a unremarkable score of 17% on Rotten Tomatoes despite the fact that it starred A-Listers like Emma Watson and Tom Hanks.

So, without further ado, and because the headline somewhere promised, the three reasons you should never, ever get this device or use one:

In case you haven’t yet figured it out, your life and your story just isn’t that interesting to most other people. Let’s face it, if I live streamed myself typing this story, the most interesting moment would be when I spilled coffee on myself and getting up stretch my legs. Not very compelling. Don’t assume others will be as enamored with your day-to-day stuff. If you still don’t believe me, read the first 100 pages of Marcel Proust’s Remembrance of Things Past and you’ll see what I mean.

This should be pretty obvious but we’ll state it it anyway. Your ‘content’ will be out there for all to see when (see reason 1) no one is really interested anyway. But they might become interested when you go out to apply for a job or a school. Nothing good happened after 11pm, and nothing good happened when you live stream yourself doing boring or (see reason 3) potentially libelous stuff.

What happens if you record yourself, either on purpose or accidentally, committing a criminal act? What if you record someone else, knowingly or unknowingly committing a criminal act? Problems ensue, that is what happens. Imagine of judges started writing warrants for access to this information, or courts started allowing them as evidence (in some cases they already do)? Every second of everyone’s live were never meant to be captures for others to see. Do yourself and the rest of us a and favor and go read a book or talk a walk, and don’t buy one of these things.