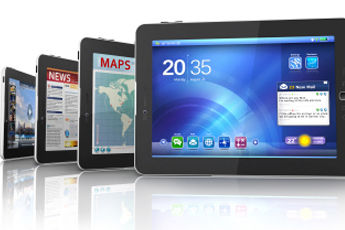 Software developer Daniel Elswick speaks for a legion of dedicated new tablet users when he sums up why he’s made the switch to the hottest computing trend since smartphones.

“I just don’t find myself doing much away from home that I need a full-fledged computer anymore,” he says. “Yesterday I used it [the iPad] for about five hours on my flight playing games and watching videos, and the battery was at about 55 percent when I landed.”

Millions of tablet users agree with Elswick about the ease of use and long battery life of the iPad. But Android and other PC tablets are gaining ground too. Here are the top five tablets heating up the market:

1. Apple iPad 2, $429 to $829
Many Apple loyalists read about Steve Jobs resigning as Apple CEO on their iPad 2. The iPad is still the king of tablets by a wide margin. Thinner, lighter and faster than its predecessor, the iPad 2 also has two cameras so you can see your friends when you’re video chatting. It offers extra software, such as GarageBand. And unlike its older brother, it has rounded edges, so it can be held more comfortably for longer periods.

Upside: Tens of thousands of apps that users love and a high-definition video camera.

Downside: No USB ports. You still have to go through iTunes for many tasks — such as upgrading your software or moving items from one folder to another — that Windows users take for granted.

2. BlackBerry PlayBook, $499 to $699
This attractive 7-inch tablet could become a major fighter in the tablet wars, especially for those who are already invested and committed to the “CrackBerry.” The hardware feels great, the tablet OS is easy to figure out, and the performance is staggeringly good — especially when it comes to Web surfing. BlackBerry die-hards alone could turn this one into a winner.

Upside: Fast Web browsing, thanks to excellent Flash implementation. (Apple still refuses to use Flash on its tablets.)
Downside: Limited apps compared to the iPad.

3. Motorola XOOM, $499 to $799
XOOM is certainly a contender for the hearts and minds of potential PC tablet buyers because it’s faster and smaller than most. The XOOM is equipped with a 32 GB hard drive for storing your photos, documents or movies. It also features 3G connectivity along with front- and rear-facing cameras, making it your portable camera too. The Xoom will be upgraded to Verizon Wireless speedier 4G wireless network in September, says the carrier.

Upside: Boots up faster than most other tablets because it’s loaded with high-end internal components.
Downside: To make the change to 4G, users can’t take the device back to the store but instead have to mail it back to Motorola — the process is expected to take six business days.

4. Samsung Galaxy Tab , $429 to $599
The Galaxy Tab’s Android 2.2 operating system gives the device a number of selling points the iPad can’t claim, including full-featured multitasking. This means you can open multiple browser windows for your email, Facebook and other sites while also watching a movie. The Galaxy also features mini apps, which allow you to easily access commonly used features, such as a calendar, calculator or task manager. Mini apps can be launched as a pop-up over full-screen applications.

Upside: It’s a 7-inch slate — a lot smaller than most other tablets, which is great if portability is your main concern.

Downside: Shorter battery life — up to 7 hours of video playback.

5: Asus Eee Pad Transformer , $389 to 498
In the past, gadget reviewers have tended to agree: Android tablets don’t perform as well as Apple’s iPad. But not so with this sleek new tablet. It features a widescreen aspect ratio and an advanced touch display, which lets you see more screen real estate if you’re typing a document or watching a movie. The Eee Pad includes a keyboard dock that not only makes typing easier, but also doubles the battery life and boosts connectivity to the cloud.

Downside: Apps: While there are thousands of apps for the iPad2, there are only hundreds for this tablet.