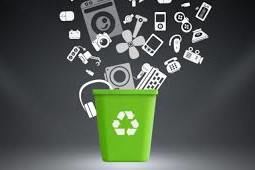 Computers — and their accessories — have become like cars: As soon as you buy one, it seems to become obsolete because there’s already a newer, better and faster model. The question is not only whether you should upgrade frequently, but more important, what to do with your old computer, printer, monitor, keyboard or modem. And then there are those expensive printer cartridges, and what to do with them when the ink runs out is another vital question.

Unfortunately, in the past, most old computers and their accessories have ended up in landfills. The U.S. Environmental Protection Agency reports that in 2005, discarded electronics amounted to 1.9 to 2.2 million tons in the United States — and the overwhelming majority ended up in landfills. Globally, the volume of electronics discarded has ballooned recently, with the environmental group Greenpeace estimating it amounts to 20 to 50 million tons generated each year.

“It’s wrong to just throw your old computer in the trash,” says Devon Diaz, a professional engineer who serves as CEO of Ease E-Waste, a California-certified and EPA compliant e-waste recycler. “There is lead in the circuit board and metals and other things that just don’t break down in a landfill.” There’s also the possibility that some of these substances will leech into the groundwater supply.

Before you decide to upgrade and trash your old PC or laptop or any peripherals, consider this list of products and the hazardous materials inside and how best to dispose of them — for your and the planet’s sake:

1. Toner cartridge
The danger: The main ingredient of the black toner is a pigment commonly called “carbon black” — the general term used to describe the commercial powder form of carbon, according to Lauren Ornelas, campaign director for the Silicon Valley Toxics Coalition (SVTC), a non-profit environmental group in San Jose, Calif., that focuses on the high-tech industry. “Inhalation is the primary exposure pathway, and acute exposure may lead to respiratory tract irritation,” Ornelas says. The International Agency for Research on Cancer (IARC) has classified carbon black as a class 2B carcinogen, possibly carcinogenic to humans. Little information exists on the hazards of colored toners, Ornelas says. Some reports indicate that such toners (cyan, yellow and magenta) contain heavy metals.

What to do: Many of these cartridges can be recycled. Some office supply chains offer rebates if you return an empty cartridge. You can also contact the manufacturer or check on their web site, because some companies, such as Lexmark, will recycle the cartridges.

2. Ink-jet cartridge
The danger: The big question with a printer ink cartridge is: What is in the contents of the ink? Some people have allergic reactions to ink. In general, if all the ink has been used up, the cartridge can be disposed of safely, according to the California Integrated Waste Management Board.

What to do: There are many places that now accept ink cartridges for recycling — some stores will pay you and some schools or charities collect cartridges for fundraising — so you can avoid any risk of leftover ink seeping from a cartridge into the earth. Some manufacturers, such as HP through its Planet Partners program, include an envelope for you to return the used cartridge to them for recycling.

3. Computer monitor
The danger: The monitor is one of the worst computer components to stick in a landfill, particularly the older and bigger cathode ray tube monitors, which are similar to TV sets in their makeup. “Each monitor or TV has a minimum of three to eight pounds of lead, a known neurotoxin and carcinogen,” Ornelas says. These monitors often have such toxic materials as mercury, cadmium and chromium, all of which are hazardous to the environment, according to the EPA. Flame-retardant materials used in the plastic also contain bromide, which in high dosages can cause neurological damage. “There’s nothing nice about a computer monitor,” adds Diaz, although some components can be recycled.

What to do: If your old monitor is still working, it can still be used. Check with local schools or charities to see if they accept donations. Some computer makers, such as Apple, will accept your old monitor back for recycling if you buy a new one. The SVTC web site lists manufacturers with take-back programs. The group is also a member of the Electronic Takeback Campaign, which lists responsible recyclers on its web site. Greenpeace also found recently that there is a market for recycled computers abroad.

4. Computer CPU
The danger: The computer’s central processing unit, or CPU, contains another mix of toxic substances, including cadmium in semiconductor chips and mercury in switches on the printed circuit boards. Printed circuit boards also contain lead. If ingested, cadmium can damage your kidneys; mercury can cause neurological damage; and lead can disrupt brain neurotransmitters. And that’s not all. Beryllium, a lightweight metal, is typically found in the motherboard. Ornelas says, “It has been classified as a human carcinogen, as exposure from it can cause lung cancer.”

What to do: Make sure, first, that you can’t get more life out of your CPU by adding memory or hard-drive space. Like a monitor, this piece of equipment may be of use to a charity or school before it ends up in the trash. If you donate this item, make sure you remove all personal data from the computer first. Major computer makes, such as Dell and Gateway, have programs to help you dispose of this e-waste. As with computer monitors, check out organizations such as SVTC or the Electronic Takeback Campaign for responsible recyclers.

5. Cables
The danger: A recent study by Greenpeace reported that polyvinyl chloride (PVC) was found in 44 percent of all plastic coating of internal wires and external cables that the group tested. When incinerated, the group says, these release dioxins, which are known to increase the likelihood of cancer. Phthalates, which the EPA has found can cause damage to the liver and testes from long-term exposure, were found in the power cables supplied with laptops examined by Greenpeace.

What to do: Many of these cables have value to recyclers because of copper wires inside. To find a list of responsible recyclers, consult SVTC, the Electronic Takeback Campaign, or the EPA has a list on its eCycling web site where you can find groups that accept computer components for recycling or reuse.

6. Keyboard, mouse, modem or printers
The danger: A keyboard, mouse or printer is typically made of plastic with a little circuit board in it. While these aren’t worth a whole lot to recyclers, Diaz says, they are definitely something that you want to keep out of landfills, especially printers. “They’re nothing but big hunks of plastic and steel,” Diaz says. Modems and networking equipment are also made of plastics and circuit boards — so they contain a bit of all the bad things in those materials, like lead solder on the chips.

What to do: While these items don’t contain a lot of valuable metals or other substances for recyclers, some responsible recyclers can get the solder off the circuit boards and reuse this material, Diaz says. In addition to the SVTC, the Electronic Takeback Campaign and the EPA, try Free Geek, an organization that lists other organizations that push for more electronics recycling, for names of responsible recyclers.

7. Laptop battery
The danger: Many older laptops used rechargeable nickel-cadmium (NiCa) batteries, which contain hazardous cadmium. Newer laptops, fortunately, are relying on newer types of batteries (nickel-metal hydride and lithium ion), which are not as hazardous.

What to do: A lot of these old batteries are recyclable, Diaz says. “You can take the casing off and there are other good materials that can be refurbished and reused.” Check out the web site of the Rechargeable Battery Recycling Corp., a nonprofit that collects used rechargeable batteries — including all three types listed above — to find a drop-off site near you.

The Reward of Properly Disposing of Electronics
If you’re feeling daunted by the toxic dangers, here’s the good news: A recent study funded by Greenpeace found that there is an eager market for used or recycled computers and other goods abroad. In the end, the extra effort to recycle these electronics — or their parts — is worth it for your family and the planet. Otherwise, e-waste that ends up at the dump will have a lasting negative impact, Diaz says: “They’ll be there for years and years and years.”