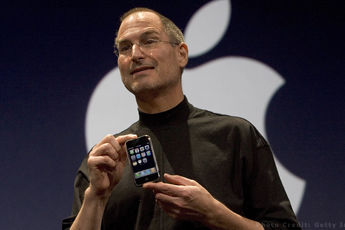 Much of the buzz in the following days was about some of the less-flattering portraits from Walter Isaacson’s biography. When Jobs’ sister, Mona Simpson, revealed his last words (“Oh wow. Oh wow. Oh wow.”) in her eulogy, it seemed like almost everyone reposted them on Facebook.

So if anything, it seems those varied portraits that emerged after his death allowed the world to see Jobs as he really was: human. His success, however, was no doubt nothing short of extraordinary. How did he do it? Here are six pieces of inspiration from Jobs himself, as quoted in past interviews.

1. Follow your passion.
In a 2005 commencement address at Stanford University, Jobs told graduates to find the work they love.

“Your work is going to fill a large part of your life, and the only way to be truly satisfied is to do what you believe is great work. And the only way to do great work is to love what you do. If you haven’t found it yet, keep looking. Don’t settle. As with all matters of the heart, you’ll know when you find it. And, like any great relationship, it just gets better and better as the years roll on. So keep looking until you find it. Don’t settle.”

2. Remember that your time is limited.
In the same address, Jobs talked about his cancer diagnosis and how it fueled his drive.

“Remembering that I’ll be dead soon is the most important tool I’ve ever encountered to help me make the big choices in life. Because almost everything — all external expectations, all pride, all fear of embarrassment or failure — these things just fall away in the face of death, leaving only what is truly important. Remembering that you are going to die is the best way I know to avoid the trap of thinking you have something to lose. You are already naked. There is no reason not to follow your heart.”

3. Surround yourself with great people.
Although he was given the credit, Jobs always denied that his return to Apple was the one thing that led to the company’s reclaimed success. Here’s what he said in an interview with “60 Minutes”:

“My model for business is The Beatles. They were four guys who kept each other’s kind of negative tendencies in check. They balanced each other and the total was greater than the sum of the parts. That’s how I see business: Great things in business are never done by one person; they’re done by a team of people.”

4. Keep it simple.
When Jobs returned to Apple, he killed off all of the company’s products save a few. Apple then threw its energies into making those products dominate their markets. As Jobs told Business Week in 2004:

“[Innovation] comes from saying no to 1,000 things to make sure we don’t get on the wrong track or try to do too much. We’re always thinking about new markets we could enter, but it’s only by saying no that you can concentrate on the things that are really important.”

5. Seek out diverse experiences.
Jobs didn’t live his life in the vacuum of Silicon Valley. In the 1970s, he studied Buddhism, Zen philosophy and meditation. He traveled to India in search of a guru. He would later tell Wired magazine that diverse experiences are what lead to creative thinking.

“Creativity is just connecting things. When you ask creative people how they did something, they feel a little guilty because they didn’t really do it, they just saw something. It seemed obvious to them after a while. That’s because they were able to connect experiences they’ve had and synthesize new things. And the reason they were able to do that was that they’ve had more experiences or they have thought more about their experiences than other people.”

6. Push people to do their best.
Jobs could be a punishing boss, but he gets credit for making people push themselves further than they thought they could go. As he told his biographer, Walter Isaacson: