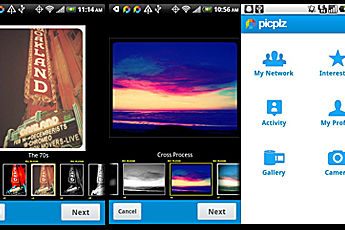 Many of today’s smartphones feature photo functions, and some are good enough to warrant leaving your old point-and-shoot at home.

That’s not to say you should expect the same crispness or resolution you’d get from a traditional camera. (For instance, the iPhone 4 camera features just 5 megapixels, while the average point-and-shoot today offers 10 to 14 megapixels.) But smartphones bring something valuable to the table: photo apps. “It’s amazing how handy it is to take a photo, quickly enhance it with an app, and email it or post it — all with a few clicks,” says San Francisco-based photographer Angela Lang.

The iPhone leads the pack in photo apps, with several hundred available for download. Android and BlackBerry offer fewer apps, but their selection is growing. Here are some of the coolest apps — you won’t believe all the creative things they let you do with that tiny little camera!

Lets you … Transform your camera
Camera+ amps up the iPhone’s camera functions. It lets you take photos from within the app and then apply effects, such as “HDR” to make colors pop, or “So Emo” to give your pics an air of drama. The image stabilizer diminishes blur, and you can even turn your phone’s flash into a continuous light when you’re snapping a photo in a low-light setting. The app also lets you crop, adjust exposure, add borders and instantly share your photos on Facebook, Flickr and Twitter.

Available on: iPhone (for Android, check out Vignette — it offers tons of filters and effects for Android’s 8.1-megapixel camera)

Photo App No. 2: Picplz
Lets you … Get social
Picplz (pronounced “pic, please”) also offers lots of filters and effects, but it features a stronger social networking aspect. You can upload your edited photos to the picplz site, view others’ photos, vote on the most interesting photos and leave comments. Browse photos by city and you can even see what everybody is snapping in Houston today.
Available on: iPhone and Android

Lets you … Add a pop of color
ColorSpash does just one thing, but it’s pretty nifty: It converts your photos to black and white and then selectively adds color back in. Imagine a photo of a circus entirely in black and white, but with a bright pop of color on a red balloon … or a black and white image of your child with her eyes crystal clear in color.

Available on: iPhone, iPad and Android

Lets you … Order prints
Here’s the problem: You have a huge library of photos on your smartphone, but Grandma still wants prints. Instead of downloading the photos on your computer, uploading them on a photo-printing site and ordering prints, get the free PostalPix app and order prints right on your phone. The app lets you crop and scale each photo, print a variety of sizes — and even print a photo onto a mousepad.

Lets you … Connect with Flickr
Flickr is one of the world’s most popular photo-sharing sites. It has millions of users (pros and amateurs), and approximately 5,000 photos are uploaded every minute. FlickStackr is a third-party companion app that brings much of Flickr’s functionality to your smartphone or tablet, with a notable addition: It lets you take photos within the app and upload them directly to Flickr. You can then interact with other users, share photos with friends, edit, join groups based on interest, organize and tag photos and learn about photography.

Available on: iPhone and iPad (for Android, check out Flickr Companion)